Given their heritage, it would be easy to assume that Gallic fashion house Kitsuné would be "Into" the sort of soul-sucking EDM you'd associate with catwalks: via this series and, more frequently, its Europhile sister imprint, they've, however, unearthed more than their fair share of pop mavericks from around the globe over the years. 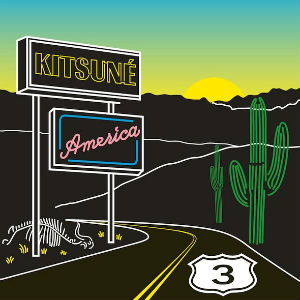 A compilation itself is like a box of chocolates of course, but in the third instalment of their  American version, 'Kitsune America 3', much of the good flavours seems to have gone. On opener 'Karma', NYC-based duo Beau bring something of a spaghetti western touch to their sweet tale of wished-for revenge, sounding not unlike their neighbours Lucius, whilst Sunni Colon's auto-tuned harmonies on the otherwise uneventful soul balladry of '1000 Roses' narrowly help to avoid the feeling it was salvaged from the talent show dustbin.

At times, you feel that in their obvious haste for artist diversity the compilers have fallen into the trap of focussing on the sound and not the songs, the result being a series of tussles with generics as opposed to fresh talent which is also doing new things. This slip up means that Navvi's plodding closer 'Speak' is more sleep inducing that the dream pop it aims to be and Misun's girl-band chirping on 'Eli Eli' grates. But the biggest turn-off comes via Brenmar's 'Medusa', a more by-the-numbers rip off of The Weeknd you're less likely to clock from San Francisco to Miami.

You'll be relieved to find out that there's good stuff here too. Lawrence Rothman's 'Montauk Fling' is the sort of morphed R&B that leads the movement towards odder, more satisfying territory. If that's defying convention, Son Lux's disconnected vox, valedictorial synths and freakish break on 'Lost It To Trying' are firmly in the art-noise bracket, whilst the much hyped Heartsrevolution are both disposable and indispensable on the bubblegum-rave of 'Kishi Kaisei'.

Backed by people with impeccable taste, the Kitsuné America ethos seems to be becoming increasingly confused between whether it wants its subjects to think or dance. Either is good of course, and this latest excursion isn't a party raided by the police at 4 am, but neither is it as interesting as that either.