Review of Way to Blue: The Songs of Nick Drake Album by Various artists

As well as being the name of a Nick Drake song and a best of compilation album, Way to Blue was a touring ensemble of folk musicians recreating the songs of Nick Drake. This album of live sessions documents their re-workings of the source material. 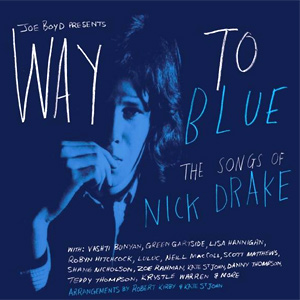 Much has been made over the years of the tragic life, short career and posthumous admiration of Nick Drake, and it is clear that he has had a great deal of influence on many popular musicians of today including Robert Smith of The Cure, Badly Drawn Boy and Beck, most obviously on his sparse, mostly acoustic sombre Sea Change album. Tribute albums can be a woeful waste of time, shedding the original songs of any charm or personality, but for the most part, Way to Blue is not one of those. Of course, Way to Blue is not without its hang ups, but we will get to those in a short while.

The album begins with Luluc taking on Things Behind the Sun from Drake's most famous and final album Pink Moon. The arrangement is somewhat more intricate than Drake's sparse original take, and Luluc's Nico-esque vocals give the song a fresher edge despite staying fairly faithful to the original. Next up is Scott Matthews doing a passable impression of his hero on Place to Be, again from Pink Moon. Again, the arrangement here is layered and intricate with the pedal steel sounding like possibly the saddest instrument in the world.

Despite leaning heavily on Pink Moon to start with, this collection features tracks from all three of Drake's albums, including the crooning of Time Has Told Me and Poor Boy, which has an almost lounge feel to it. It is a brief but incredibly necessary respite from the woe and misery that Nick Drake songs are capable of inspiring.

While Nick Drake kept his albums mercifully short, Way to Blue is certainly value for money in terms of length. In concert, this probably worked quite well, with people leaving with their fill of Nick Drake. On record, however, it is a little too much, and perhaps a little bit of editing would not have gone amiss. A few songs, such as Black Eyed Dog and Fruit Tree could have been dropped, or perhaps this could have been released over two volumes. There is too much here and it is difficult to get through in one sitting.

That is not to take away from some of the stellar performances though. Vashti Bunyan's take on Which Will showcases her beautiful voice against a slick and well-rehearsed string section, and the ethereal arrangement behind Parasite is almost enough to surpass the original. Almost.

Way to Blue will not make Nick Drake any new fans, but as a document of a tribute tour, it does its job in presenting a fresh take on the source material without embarrassing any of the performers taking part.