Veteran British Actress Vicki Michelle Is Convinced She Could Have Been Blinded After She Was Struck By A Wine Glass While Appearing On A British Tv Chat Show This Week (Beg21sep15). 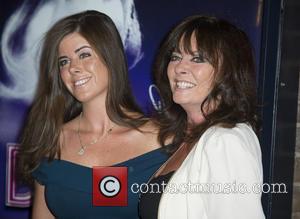 The 'Allo 'Allo star was hospitalised following an incident on spin-off series Celebrity Big Brother's Bit On The Side on Tuesday (22Sep15) when a debate among the show's guests, Aisleyne Horgan-Wallace, Farrah Abraham, Jenna Jameson and Janice DICkinson, turned nasty.

Michelle alleges she was hit on the head by a glass thrown by one of the panellists during the alleged bust-up, and she is convinced the incident could have damaged her sight.

"The police have been on the phone to my agent and have seen the footage and have asked if I want to press charges for assault. That is something that I am going to look at."