David Beckham says his home has turned into a ''Pink palace'' since the birth of his first daughter Harper Seven with wife Victoria. 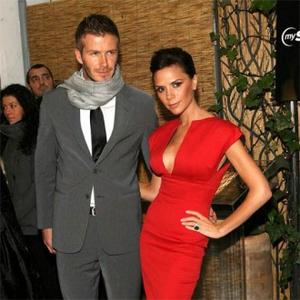 David and Victoria Beckham's home has turned into a "Pink palace" since the birth of their first daughter.

The soccer star and his wife recently welcomed their fourth child, a girl named Harper Seven, into the world after having three sons Brooklyn, 12, Romeo, nine, and six-year-old Cruz.

Despite being only 12-weeks-old, David admits Harper has already made a huge impact on the family.

He said: "The house was pretty feminine anyway with Victoria but of course the boys tried to change that. Having Harper in the house now, there are little dresses hanging up and little socks lying around - it's amazing to see.

"It's getting to be a pink palace already - I think pink and lilac are the colours of the year."

While the couple's three sons haven't shown any jealousy towards their new baby sister, David admitted he often fights with them over who gets to hold Harper.

In an interview with Britain's HELLO! magazine, he said: "There hasn't been one moment of jealousy. They literally won't put her down. The only conflict that happens between them, and me as well, is when we're all fighting over who gets to hold her.

"The boys are unbelievably protective of their sister. Anyone that comes to the house and wants to hold her, they ask 'Have you sanitised? What were you doing before you came here? Because your hands need to be clean.' "