Victoria and David Beckham are currently in Beijing as part of a promotional tour for in David's role as Ambassador of Chinese Football. 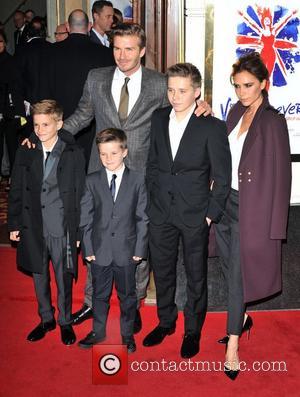 Both of the couple created a stir of their own as screaming fans clamoured to catch a glimpse of Victoria as the 39 year-old posed outside luxury retailer Lane Crawford whilst David attended a Chinese Super League football match at the Shanghai Shenxin Football Club in an appearance that sparked a stampede.

According to Sky News, "three police officers, two security guards and two students were hurt in the crash outside the arena at Tongji University" as news spread around that Beckham would arrive to meet members of the university's football team in Shanghai. Beckham was unable to reach the pitch through the teeming hoardes, and the event had to be reportedly cancelled.

Victoria in particular has created news worldwide after pictures from Brand Beckham's tour have shown several shots of the former Spice Girl smiling - an occurrence known to be rare in front of the pap's lens. Not only was she pictured smiling on Chinese TV, but 38 year-old David posted a close-up of her clearly laughing on his Facebook page with the caption, "See, I told you she smiles."

The Beckhams made an appearance on a China Central Television show and were interviewed together as Victoria took the opportunity to introduce models wearing pieces from her new fashion collection. She herself looked stylish in one of her own striking red dress with a black collar, whilst he wore a double-breasted grey-blue suit.

The Beckhams have been mobbed all over the place in China with fans rushing over to meet them and have autographs signed. Victoria expressed her excitement for their East Asian welcome, tweeting: "Thank u to my amazing fans here in Beijing, what a welcome!!! X vb."

Now David has retired from playing football, it looks like the couple are finally able to kick back and have some fun as Victoria's designer brand continues to expand worldwide. The Beckhams Are On Tour In Beijing As David Makes Footie Appearance And Victoria Shows Off Fashion Line.