Heidi Klum has praised David and Victoria Beckham's parenting skills, saying they have the best behaved children in Hollywood. 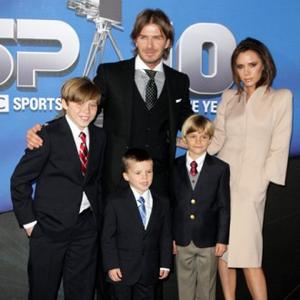 David and Victoria Beckham have the best behaved children in Hollywood, according to Heidi Klum.

Victoria - who has three sons, Brooklyn, 12, Romeo, eight, and six-year-old Cruz with her soccer superstar husband - is currently pregnant with the couple's fourth child, a confirmed girl, and close friend Heidi thinks the baby will fit right into the well disciplined family.

Heidi - whose four children, Leni, six, five-year-old Henry, Johan, four, and one-year-old Lou, are friends with the Beckham kids - said "Victoria needs no advice - she has the best behaved kids in the world. When we go to all their birthday parties, each of the kids writes handwritten thank you notes on their own headed paper. None of the other kids do.

"They're so polite and well-spoken, it's amazing. The other parents stand there in awe listening to the boys speak so politely and correctly. David and Victoria have made sure they always say their pleases and thank yous, and definitely no swearing is allowed.

"Our kids all play together and I must say Victoria's boys are a pleasure to learn from."

Heidi - who is married to singer Seal - has also revealed how overjoyed Victoria was when she discovered she is expecting a much longed for girl.

The supermodel believes the tot will be the "most stylish little girl" thanks to her former Spice Girl-turned-fashion designer mother.

She added to the Daily Mirror newspaper: "Victoria and I are so excited. She always wanted a girl so it's incredible her biggest dream has come true. She is going to have the most stylish little girl, decking her out in Spice Girls' clothes with the biggest selection of her designer handbags to play with."

Despite Heidi's praise for her parenting skills, Victoria has admitted being a mother is "the hardest job in the world" but she can't wait to meet her daughter.

She said: "I was so surprised when I found out because I was really expecting another boy. I cannot wait for her to be born."