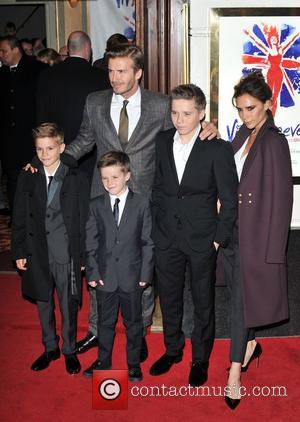 It was only a matter of time before one of the Beckham children began capitalising on their inherited blessings, both fiscally and genetically. Ten year old Romeo Beckham, the second of the bunch of four offspring, is the new face of Burberry. His first campaign video, for their Spring/Summer 2013 collection, was released online today.

Romeo is clearly the centre of their latest campaign, with the video hiding the youngster, showing  a mysterious model walking across a platform and popping his collar before revealing the endearingly gappy grin of Romeo Beckham. "We are excited to reveal news of the Burberry Spring Summer 2013 campaign cast, featuring Romeo Beckham and Cara Delevingne, Edie Campbell, Charlotte Wiggins, Alex Dunstan, Charlie France and Max Rendell", Burberry said in a statement, reported by the Mirror.

He was a natural choice for the Burberry creative director Christopher Bailey, particularly after being included in GQ's best men list in January 2011, and his mum Victoria Beckham having spoken so frequently about Romeo's love of fashion. "I think that my middle son thinks that he is going to take over." She said, "Romeo likes to get involved. He likes to go out in a suit with a bowler hat - he's a real fashion lover."

Bailey described the youngster as "a joy to work with", reports the Telegraph, adding "We had such fun shooting the campaign and I think that comes through in the images which really reflect the upbeat spirit of the collection."