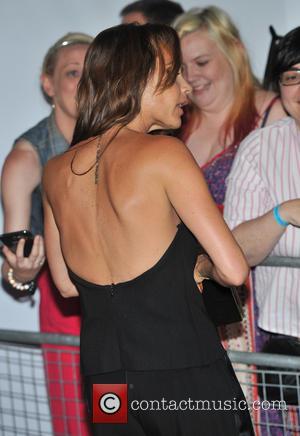 Victoria Beckham, Rebel Wilson and Rita Ora were celebrating on Tuesday night (04Jun13) after winning top prizes at the star-studded Glamour Women of the Year awards in the U.K.

The 10th annual ceremony at London's Berkeley Square Gardens feted a host of stars including Beckham, who was named Woman of the Decade, and Harry Potter star Daniel Radcliffe, who was voted Man of the Year.

Accepting the Film Actress Award from fellow Australian Kylie Minogue, Bridesmaids star Wilson joked, "Thank you so much Kylie, I just feel so lucky, lucky, lucky, lucky! I'm just excited to receive this award because I was told there was a cash prize... There's not?"

Girls star Zosia Mamet was thrilled with her International Tv Actress gong, declaring, "This is the first award I've ever won!" and Joanne Froggatt picked up the U.K. equivalent for her role as Anna Bates in Downton Abbey.

British actress Helen MCCrory praised her partner, Homeland hunk Damian Lewis, as she received the Theatre Actress Award for her role in the play The Last Of The Haussmans, insisting, "I'd like to thank my husband, who always stands by me. We've only got one chair in the house."

Presenting the Solo Artist of the Year prize to Rita Ora, model Cara Delevingne gushed, "I genuinely don't know anyone who deserves this more. She's my best friend," while Jason Derulo stepped onstage to crown The Saturdays the Best Band.