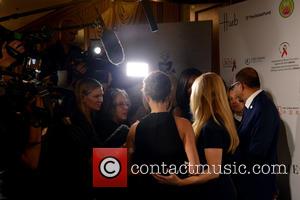 Researchers at the London School of Marketing have discovered the Beckhams are valued at $752 million (£470 million), easily outpacing the monarch, who is estimated to be worth $544 million (£340 million).

The study analysed the earning power of the retired soccer star and his singer-turned-fashion designer wife, in addition to the global interest sparked by the moves of their four children, including 13-year-old Burberry model Romeo and 16-year-old Brooklyn, who boasts more than four million followers on Instagram.com.

"The Beckham brand has been used to advertise everything from designer clothes, to satellite television and even whisky," explains Anton Dominique, the school's chief marketing officer. "What's also interesting is that the family name is almost as influential as any individual family member."

According to the study, mum and dad Beckham bank a joint $64 million (£40 million) a year and they have built up a portfolio of assets worth $304 million (£190 million). Meanwhile, Victoria's self-titled fashion label is valued at $96 million (£60 million), and David Beckham's soccer firm Footworks is thought to be worth $240 million (£150 million).