Victoria Beckham left the Spice Girls reunion early because she wanted to put her baby daughter Harper to bed so she rushed back to Los Angeles. 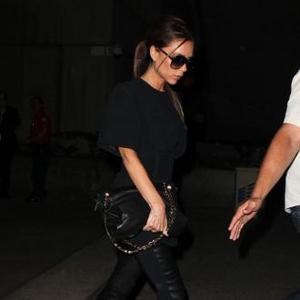 Victoria Beckham left the Spice Girls reunion early because she wanted to put her baby daughter to bed.

The Fashion designer was in London yesterday (26.06.12) with the rest of her bandmates - Mel B, Emma Bunton, Geri Halliwell and Mel C - to launch new musical 'VIVA FOREVER!' but as soon as the press conference was over she jetted straight back to her home in Los Angeles to see 11-month-old Harper before she went to sleep.

Victoria - who also has sons Brooklyn, 13, Romeo, nine, and seven-year-old Cruz with soccer star husband David - said: ''I'd love to stay and hang out with the girls but I'm desperate to see her before she goes to bed. I have to race home for bedtime.''

'VIVA FOREVER!' is a musical written and produced by Jennifer Saunders and Judy Craymer, based on the songs of the Spice Girls and Victoria is hoping it will become a worldwide smash.

Speaking about the show - which will open at London's Piccadilly Theatre in December - Victoria said: ''London is a great starting point. We're all so proud to be British. We're hopeful this will be the start of something big.''