Rita Ora ''kicked ass'' in the latest installment of the 'Fast and Furious' franchise, according to star-and-producer Vin Diesel. 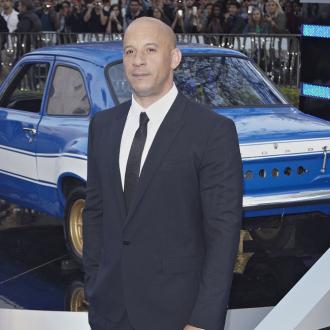 The 'Radioactive' hitmaker has a small cameo appearance in the upcoming Hollywood blockbuster - which was partly filmed in the singer's hometown of London - and producer-and-star Vin was convinced she was the perfect fit for the high octane movie after meeting her on a night out.

Speaking to BANG Showbiz at the movie's world premiere at the Empire Cinema in London's Leicester Square on Tuesday night (07.05.13), he explained: ''I was out one night and was introduced to her. We were looking for someone to kick off the most quintessential race in the movie.

''We wanted somebody who represented today's London and have that presence to kick off a race of that style and she was just perfect and she was game to do it. We were lucky to get her and we were lucky that she came in and kicked butt.''

The 45-year-old big screen tough guy, who has starred in all but two of the 'Fast and Furious' movies, was excited he could finally ''exhale'' at the film's premiere after working tirelessly on the action flick for the past two years in both an acting and producing capacity.

He said: ''Tonight is paradise; it's validation like no other. It's the first time in this whole process where you can relax and take it all in. Up until the premiere you're thinking about what to do to enhance the movie, this is the first time you can exhale.''

The actor was joined on a special blue carpet at the premiere by his castmates Paul Walker, Michelle Rodriguez - who is returning to the franchise as Letty Ortiz, Jordana Brewster, Luke Evans and Elsa Pataky.

At one point, Vin was interrupted as he spoke to reporters by a boy who asked him if he ''wanted a drink'' and tried to give him a novelty pint of beer. The star smiled broadly and exchanged jokes with the young fan but declined his offer.