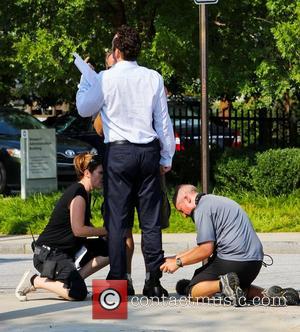 Picture: Vince Vaughn on the film set of his new movie 'The Internship' in Atlanta Atlanta, USA - 23.08.12

DODGEBALL star Vince Vaughn has just quit smoking, years after picking up the habit to be more "authentic" in his movie roles.

The Hollywood actor suddenly gave up his nicotine habit five weeks ago, and he's found that while he no longer smokes, he now spends an awful lot of time talking about it.

Vaughn, 34, says, "I take every conversation and I steer it towards how I quit smoking. People will be like, 'Vince do you wanna go see a movie?' I'm like, 'That's terrific, because I have quit smoking and you can't smoke in a movie theatre.' You just wanna find a way to talk about that.

"I (quit) cold turkey because... you have the best chance of staying off it for a long period of time.

"I never smoked until I was 24 and I didn't wanna look fake in the movie. But I looked totally fake in the first movie I smoked in... I got addicted from doing that and that's how I started - for the craft, isn't that so beautiful?"