The Dress Vivien Leigh Wore In Gone With The Wind Has Fetched More Than Twice Than Expected At An Auction In Beverly Hills. 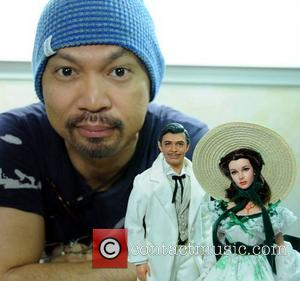 The purple dress and fitted overcoat the actress wore as Scarlett O'Hara in the 1939 movie classic was expected to go under the hammer for $60,000 (£37,500) at the Heritage Auctions sale on Saturday (18Apr15).

However, an anonymous buyer paid an impressive $137,000 for the outfit, which the owner, former Universal Studios hair and make-up artist Jim Tumblin, bought in the 1960s for just $20 (£13) after spotting it at a costume company.

Tumblin's 150-lot collection also included a grey suit worn by Clark Gable, co-star Leslie Howard's Confederate uniform and a script which belonged to Hattie MCDaniel, who won an Oscar for her role as Mammy.