Ohio boys, Walk The Moon, released their major debut in the States back in the summer and now they've shipped it over to the UK. A good move seeing as the UK is a pop-loving place. Add a few words and brand it 'indie-pop/rock' and even those who neglect the charts may take a bit notice. They released an album themselves back in 2010 entitled 'I Want, I Want.' Their subliminal wining obviously worked and they got signed to RCA Records 3 months later. 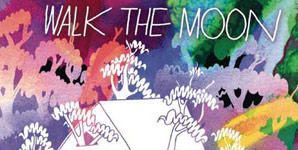 The self-titled album kicks off with 'Quesadilla', with its experimental intro and the fact it's named after a tortilla, what's not to love? Nicholas Petricca's voice has a similar tone to that of Ben Duffy of Fenech-Soler and Nate Ruess of Fun. Speaking of Fun, Walk The Moon has been compared to them musically. The harmonies carried in 'Lisa Baby' and single, 'Anna Fun' are sort of like Fun. Final track, 'I Can Lift A Car' also has some resemblance particularly in its kooky name and words (just feast your eyes upon this one), 'she kissed me on my new futon, and I'm cosy because she finds me attractive.' Its hearty beat brings Foster The People into the equation.

'Jenny' has resilient drums, whacky guitars and a building middle section that repeats, 'I'm not going to take it from you, unless you give it to me.' Ooh err. It's animated, brushing on a pop/punk feel. But the cheeky words on 'Shiver Shiver', 'Shall we get intimate again, I think so' just feel a bit odd in the middle of a song. It's as if someone has eavesdropped on a dramatic, Glee-esque conversation and accidently recorded it. 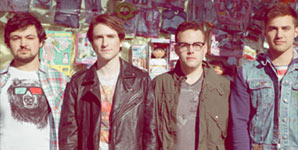 In the same vein as Fallout Boy and the more recent fun., Walk the Moon look set to start small then take the world by storm with the debut, self-titled album from the Cleveland foursome already making huge strides for the group already.