Weezer - Everything Will Be Alright In The End Album Review

Many years ago, I was working in a recording studio with a guy who'd engineered Weezer's classic 1996 album 'Pinkerton'. On learning of his involvement with the record - a longtime favourite of mine - I probed the guy to spill the anecdotal beans on what it was like to work with the band and to be involved in such a project. He said that it was a thoroughly pleasant experience but that one thing he always remembered about it was that when he and Rivers Cuomo were playing around with guitar tones and effects, Rivers would be cranking out old Slayer riffs and doing some serious skiddly-widdle shred. I was very surprised to hear this, mainly due to the relatively straight-forward style of the band's music, and I wondered why Rivers had never let this 'metal-axe-god' element really come through in Weezer's music, particularly since he apparently is highly proficient in this area. I guess he just likes to keep his cards close to his chest. 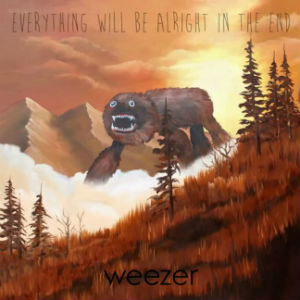 Fast forward to Weezer's new record entitled 'Everything Will Be Alright in the End' - their 9th! - and Rivers still seems to leave everyone second-guessing about where the band is going to venture next, at least sonically speaking. For years, a large portion of the band's fanbase have hoped that Weezer would one day return to the crushing overblown despair and triumph of 'Pinkerton' but instead the band have stayed in fairly safe territory over the last few albums, generally sticking to the saccharine pop formula perhaps better associated with the two self-titled albums. Perhaps sensing that they had been treading increasingly shallow water with the last two - 2009's 'Raditude' and the following year's 'Hurley' - 'Everything Will Be Alright in the End' marks quite a departure into unexpected theatrical 'rock musical' territory.

Irregular Weezer collaborator Ric Ocasek has returned to the producer's chair behind the desk on this one, perhaps to inject the record with some of the spark and vivaciousness they'd lost in recent years. Opener 'Ain't Got Nobody' is pleasant enough - pretty typical Weezer fare - and the production is killer. Really powerful and, in contrast with most major-label rock records made in Los Angeles in 2014, they actually just sound like a band playing in a room. The second jam and lead single 'Back to the Shack' is an early low-point on the album, revisiting the kind of mid-paced 'Weezer arena-arm-waving' vibe a la 'Beverly Hills'. They pull it all back together with 'Eulogy for a Rock Band', however, which hints at the odder, positively Eurovision-istic moments to feature later in the record. There follows, a double whammy of two unprepossessing pop tunes which you wouldn't be surprised to hear in some Jason Segal movie or such.

'The British are Coming' marks the beginning of the second half of the record and this is the point whereupon I first started to imagine these songs performed as part of a kind of Wes Anderson-directed Broadway musical. The songwriting still bears the hallmarks of Weezer but there is a theatrical imagery pervading the songs which I've never felt in a Weezer record before - and it's nice! It kind of feels like the band knew that they should really start to break some new ground but, instead of going all-out and taking a radical left-turn into wholly uncharted areas, they've decided to allow the songwriting to develop quite naturally without really sacrificing any of the sonic textures that you wouldn't ordinarily expect.

The final suite of tunes on the album is really where the widescreen, theatrical elements hit full beam culminating in the wonderful and frankly ridiculous 'Anonymous' and 'Return to Ithaka'.

Overall, listening to this album a few times over has been a pleasant experience but unless you're a seasoned and committed, die-hard Weezer fan 'Everything Will Be Alright In The End' might not offer you everything you want it to. I'm a lifelong 'Pinkerton' fan and I'll always have that but perhaps, if you're just happy enough with a new Weezer album, then this one will do for now.