Review of The Red Album by Weezer

Review of The Red Album by Weezer. 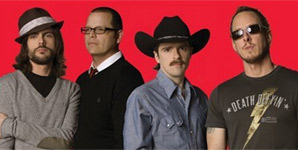 The process of writing about music and reviewing albums is a complicated one. Does one simply say what one thinks? Is that objective enough? Do you look for the positives? What about if you've had a bad reviewer day? What if you're not in the mood for a type of music? You know - it's three a.m and someone puts Slayer on. Erm..where's the chillout trance please? So, in order to be objective, should one listen to an album through a variety of moods? Objectivity is in fact a subjective concept though.
So, on to Weezer then. Descriptive review reads thus: Well respected American alt-college rock band released slightly ambitious album that still obviously sounds like themselves, except a bit more ambitious. Thoughts of this reviewer? Not that exciting really. It's Weezer, and some of the songs are pretty good.

Maybe this is the answer - provide the facts, add a brief opinion, highlight the positives. Mix well and bake at gas mark 6. Hey presto one review.