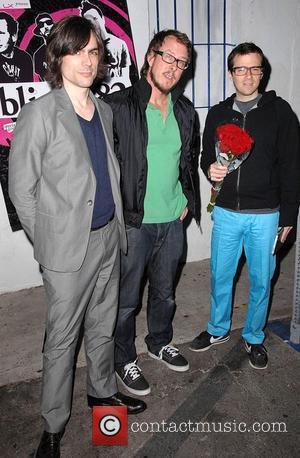 Rockers Weezer have picked a picture of Lost star Jorge Garcia to grace the cover of their next album, HURLEY.
Frontman Rivers Cuomo admits the band struggled to come up with a title and accompanying image for their eighth album - until they settled on a photo of the larger-than-life actor, who played Hurley on the desert island series.
Cuomo explains, "We struggled super hard trying to come up with an album title, trying to find some kind of phrase that summed up the whole aesthetic behind the album...
"I was coming up with all kinds of stuff, but ultimately, we just went with some random word that doesn't really have anything to do with anything. I just loved this photo of Jorge Garcia - it just had this amazing vibe. We didn't want to do a fourth self-titled record and we knew people would refer to it as 'the Hurley record' even if (we) left it without that title, so we just called it Hurley. No words are on the cover because all we wanted was his amazing face."
But Cuomo admits he wasn't always a Lost fan and only began watching the cult series after meeting Garcia, reports Spinner.com.
He adds, "I only made it through season two, so I was really nervous hanging out with Hurley/Jorge recently, because I didn't want to hear something about how it all resolves, or overhear anyone else talking about it. I really like the show though."
Hurley hits shelves next month (Sep10).