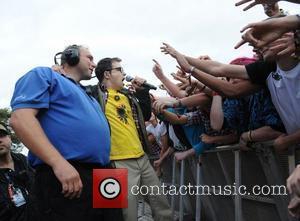 Alternative rock supergroups Weezer and My Chemical Romance teamed up onstage for a one-off fan-only show in Los Angeles on Tuesday (21Sep10).
The two bands performed My Name is Jonas at the AXE Music One Night event in Hollywood.
The audience was made up of contest winners and celebrity Weezer fans Vanessa Hudgens, Glee star Mark Salling and actor Jorge Garcia - the man who appears on the cover of the band's new album Hurley, which was partly inspired by his character on TV drama Lost.
Garcia also took to the stage with the band to duet with Rivers Cuomo on Keep Fishin'.