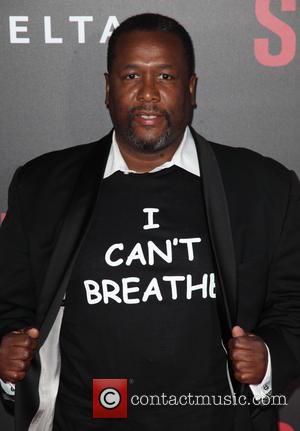 Picture: Wendell Pierce - Shots of a variety of stars as they took the the red carpet for the premiere of the movie drama 'Selma'...

Actor Wendell Pierce led the cast of his new civil rights movie Selma in a public protest on Sunday (14Dec14) by wearing T-shirts referencing the police killing of unarmed black man Eric Garner ahead of the film's New York premiere.

The Wire star joined forces with co-stars including David Oyelowo, E. Roger Mitchell, Andre Holland and Lorraine Toussaint, and director Ava DuVernay to wear black T-shirts with the words, "I can't breathe" printed across the chest.

Staten Island resident Garner was heard uttering the phrase over and over again as he gasped for breath after a cop placed him in an apparent chokehold during an arrest in July (14), when he had been caught illegally selling cigarettes.

His death was ruled a homicide by the New York City medical examiner, but a grand jury chose not to indict the officer responsible for his passing earlier this month (Dec14) - sparking widespread protests across the U.S., where demonstrators were already angry over another grand jury's decision not to prosecute the cop who fatally shot Ferguson, Missouri teenager Michael Brown in August (14).

The stars of Selma made their support for the calls for justice known on Sunday by posing for a group photo in their shirts on the steps of the New York Public Library, while holding up their hands.

The snap was taken shortly before the group headed to the Ziegfeld Theater for the Selma premiere, where Pierce decided to continue modelling his T-shirt for photographers.

The pre-premiere protest took place a day after thousands of activists took to the streets of the Big Apple to take part in the Millions March Nyc, another demonstration over the Garner and Brown killings.

Oyelowo, who plays human rights activist Martin Luther King, Jr. in the film, recently expressed his hope that his movie would inspire campaigners to keep the protests peaceful.

He told The Hollywood Reporter, "Thankfully, we're seeing a lot of the same good sides of protests happening with these protests - i.e. that they are non-violent, and that we are now seeing black and white and everything in between coming together against injustice. I think that the next step for us to be able to really articulate our demands. What is it we want out of this? In Selma, it was voting rights, and now it's police reform. We needed federal intervention for the verdict situation (in Selma); I would say we need the same thing for the police. Who's going to police the police? We really need to press to the government that this cannot go on."