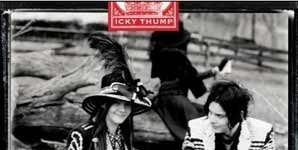 Whatever acclaim Get Behind Me Satan achieved, including its Grammy, it was an awful mess of an album for this now iconic band. Thankfully, the White Stripes' sixth album is a return to the kind of form they showed on their early work like De Stijl. Innervating blues rock, with a fair measure of British folk thrown in.

If that sounds like Led Zeppelin III, you'd be dead right. Icky Thump (which seems to be a reference to the Goodies...) is like the missing link between III and IV, with its deeply captivating riffs and guitar squeals so feral that they sound alive. Along the way, there is some flamenco, bagpipes and a couple of odd folky moments, but the sheer excitement of the rock is the clincher for the majority of the time. Jack White is on top form vocally and on guitar - he nails his solos more reliably than Jimmy Page.

The drumming is kept mercifully simple, providing a solid platform for the blistering attack out front. Icky Thump is a fantastically loud album - there's not a moment when this is background music. This is the same White Stripes that captured our attention with Fell In Love With A Girl all over again. It's an awesome return to pre-Elephant form.