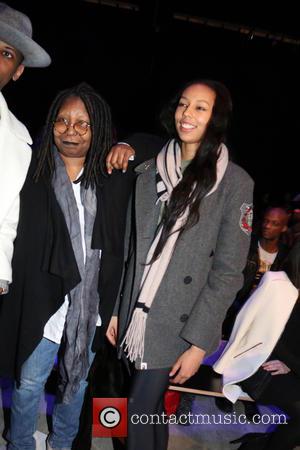 Fashion Police co-host Rancic came under fire on Monday (23Feb15) after claiming Coleman probably smelled like "patchouli... maybe weed" while commenting on the dreadlocks the star showed off at the Academy Awards on Sunday (22Feb15).

Coleman fired back, branding the remarks "offensive" and "disrespectful", and her pal Kelly Osbourne, Rancic's co-presenter, even threatened to quit the show over the backlash.

Rancic has since apologised twice to Coleman and anyone else she offended, but that hasn't stopped a host of famous black females, many of whom have worn dreadlocks, weighing in on the controversy and applauding Coleman for standing up against the negative comments.

Taking to Twitter.com, Selma filmmaker DuVernay writes, "You're beautiful, Queen. We bless the ignorant and wish them well. Onward."

Goldberg addressed the scandal on her U.S. talk show The View on Wednesday (25Feb15), but insisted Rancic was not racist, just poorly informed, saying, "This was offensive to me. I have had dreads for 40 years and never have I smelled like patchouli... but it is a stereotype... I've met real racists, so I'm very hesitant to call people who put their foot in their mouth racist. She was just ignorant."

Meanwhile, Beyonce's sister Solange, who favours her afro style of hair, urged Coleman not to let the criticism get to her, because she isn't the only one to be targeted by the Fashion Police hosts.

She tweets, "Yeah @fashionpolice been bashing my fro for years, @intouchweekly (magazine) compared it to a dog..."

Actresses Kerry Washington and Viola Davis have also expressed their support online, while reality Tv star Khloe Kardashian writes, "@Zendaya you are a gorgeous, intelligent young lady! I love all that you represent! Keep empowering and shine bright!".

Coleman has moved to end the drama by responding to Rancic's latest heartfelt apology. She writes: "Giuliana, I appreciate your apology and am glad it was a learning experience for you and for the network. I hope that others negatively affected by her words can find it in their hearts to accept her apology as well."