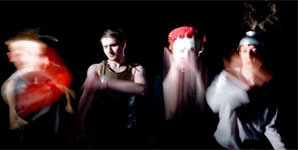 There's a brief sleevenote on this debut album by Wild Beasts that fair set my teeth on edge. "The four boys of Wild Beasts", it says, "aren't concerned with being of the modern, or being of the renaissance, being baggy pantsed or being tight pantsed, being in a scene or being in a place. Wild Beasts' music, being what it is, just is". While acknowledging the admirable use of the word "pantsed", the Pretention-O-Meter began to register some unprecedented off-the-scale readings, and the Bullshit-O-Tron actually melted and had to be sent back to the manufacturer for repair and recalibration. They can't be serious, surely?

But, after listening to the album a number of times, I have to hold my hands up and say that these bold claims are actually ALL TRUE. What Wild Beasts have created here is a startling album that, while informed by many, many things, is like none of them. It is, in short, an astonishing piece of work; an incredibly coherent, self-referencing slice of high-camp theatri-dance-pop in which there is seemingly no gap between conception and execution. It oozes self-belief and a happy confidence in its own merits. It's hermetically sealed in it's own joyous bubble. It doesn't thumb its nose or give the finger to the rest of the world - no, that would be vulgar. It doesn't need to measure itself against anything else - that would be competition, and that too is vulgar. It just ... well ... is.

First things first: this album is not going to be for everyone. The opening semi-lupine howl of Hayden Thorpe's vocals should tell you that. He has, I'm told, what's known these days as a "Marmite voice" - you'll either like it or you'll not. No half measures. But even if you fall into the latter camp (ho ho), you'd have to be the most hard-hearted churl not to admit - however grudgingly - that the performance he delivers over the course of this album is nothing short of breathtaking. His voice swoops, hollers, howls and growls in a fashion that - if you buy into it - you'll find utterly mesmerising. You might think of Antony and the Johnsons as a reasonably convenient cotemporary touchstone. You might equally think of Sparks or Kate Bush. Yes, that's right - Kate Bush. It's a varied, virtuoso performance with its tongue in its cheek and its heart on its sleeve. It's astonishingly honest and outrageously camp by turns, and it probably couldn't give a shit what you think either way. To offer a counterpoint, drummer Chris Talbot takes occasional vocal duties, and he's easily good enough to front a band in his own right. A talented bunch, then? Oh yes.

It seems daft to go through these tracks one by one, so I won't. You have to hear this album in its entirety, then listen to it over and over again. Be ye assured, there are some fine, fine moments to enjoy. Deft guitars, inventive drums, elastic bass - they're all here, along with occasionally suitably histrionic piano. And they're all beautifully recorded, mixed and produced. The sounds are clear, distinct: it's possible to follow each instrument through each song with real ease. My personal favourites? Well, "The Devil's Crayon" for one, which Noel Coward might have had a hand in in another age and universe, with it's tick-tock, almost ukelele-like guitar (what a turn that is!) and a bass like a syncopated metronome, iced with some lovely piano work. "Woebegone Wanderers" makes me want to dance and laugh at idiots at the same time. I normally only engage in one of these pursuits. I love the obsessive repetitions on "Please Sir" ("I wish and I hope/I wish and I hope"; "Visceral, visceral") and the stupendous public school reference to "Chips with cheese". (Dear Sting: please fuck off. Thanks.) The intro to "She Purred While I Grrred" should melt a heart or two, and should soften you up for the frantic, breathless, heaving intimacy of the lyric. Former single "Brave Bulging Buoyant Clairvoyants" takes Franz Ferdinand's take on dance music and twists it into something altogether more organic that plasters a dribbling grin all over my face. And these are just my personal highlights. It's all really well played, and induces synaptic gaps and little fizzes all the way through.

You might notice I've not mentioned the lyrics much. That's not to say they aren't good, because they are. They're very, very good. It's because I want you to listen to this record and find your own favourite bits. Suffice to say they are "lyric" in the true sense of the word. Undoubtedly poetic, occasionally preposterous, engaging and whimsical, they veer from the sublime to the ridiculous to what seems the bleedin' obvious - except if they were that obvious they'd have been done before, and in my frame of reference, they haven't. Jump in heedlessly, then pay lots of attention. The themes may not be new - sex, death, hints of homo-eroticism, sweat, lust, more sex, more death - but I haven't heard them done quite like this before.

And that's the trick: while some aspects of this album are very immediate, the best bits aren't. It can withstand any number of listens and still reward you. To be sucked into this record is to be sucked into another world entirely. You might find it at the back of the wardrobe, or at the bottom of the garden. More likely you'll find it in a 1930s black-and-white movie, or you'll fall into it via a couplet that jumps out and grabs you, or a little hook that reels you in, or a harmony that you just have to keep going back to. Don't resist it: further hidden joys await. It's a world where every single contrivance you can think of is not only normal, but somehow logical. And it is, above all, a joyous, ecastatic, entirely unfettered piece of work.

They're right, you know. It just is.