But was it a set-up? 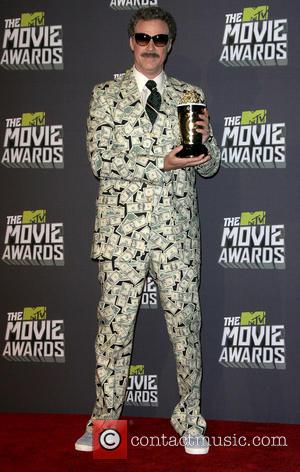 We can’t help but feel this one was a set-up, but Aubrey Plaza’s interruption of Will Ferrell when he was accepting his MTV Golden Popcorn Comedic Genius Trophy certainly has got the media talking, with many likening her display to the now infamous Kanye West interruption when he prevented Taylor Swift from giving her acceptance speech for best video at the MTV Music Awards.

The incident at the Golden Popcorn awards saw Plaza, with the name of #The To Do List, her new movie, written on her chest, walk up on stage barefoot and attempt to wrest the award Ferrell had been given off him. Ferrell, unsurprisingly, wasn’t up for that and kept a firm hold of his prize. Eventually Plaza just walked off the stage and back to her seat, where she subsequently spilt her drink. "Aubrey Plaza, everyone," Ferrell said, of the awkward moment. "Just like we rehearsed it. Perfect, it was perfect. Not too long, not too short. Right on the money."

Was that quick thinking on Ferrell’s part or was it all a ruse? Ferrell seemed to play it up to MTV later on, saying "I think she wanted to tell me something important, but there was no message. It was just a lot of hot liquor breath. And, then, and a little bit of sweat. And then she ran away. But the ship sailed on." But then Plaza said on her Twitter after the event "thanks for the advice @kanyewest went better than planned!" Hmmm. Ferrell had to fight hard to keep that award on Sunday night (April 14, 2013)