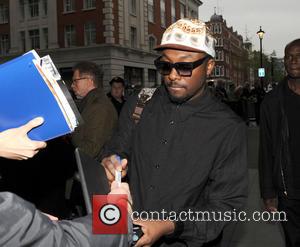 Picture: Will I Am - Will.I.Am at BBC Radio 1 to prmote The Voice final - London, United Kingdom - Friday 4th April 2014

Will.i.am wants U.S. education officials to help prepare students for a technological future so they can compete in years to come with younger generations who will be brought up fluent on it. The Black Eyed Peas star is a big fan of technology and gadgets, even going so far as returning to school earlier this year to learn more about creating computer programming codes.

Speaking at former U.S. president Bill Clinton's Clinton Global Initiative (CGI) annual meeting on Tuesday (September 25th) - a meeting that brings together global leaders, including business bosses, heads of state and philanthropists - the music industry man enthused about the importance of helping students get to grips with skills that they will need to possess so as to compete in the workplace in the future. He told the crowd, "Twenty years from now, I want to see an eight-year-old when they're 28 compete with an eight-year-old that (sic) going to be 28 twenty years from now from Bangalore, India." Continuing, he said "We really need to think that far... Yes, this presidential election is important, but it's only four years. What's happening twenty years from now? What is a twenty-year plan? I want to know that plan.

Talking further, Will.i.am added "As the world is moving to a world that depends on technology, none of these kids are geared-up to even understand the world in 2030. I want to take the leverage and the power that I have... to bring opportunity and to bring change in inner-cities."