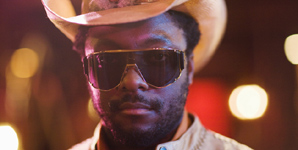 We speak to Will.i.am about his first acting role in X-Men Origins: Wolverine.

Q: Is this your first acting role?

Will.i.am: If I had to imagine my entry into the world of acting, I would think it would be an independent film. Mos Def would have been the lead. And I would have played a producer at a studio that had one scene and played a beat or two.

Q: So how did you end up doing a big action film instead?

W: I don't think it was written that way. And I mean that whole-heartedly. There's some bigger purpose in this whole thing. One, I'm a fan of X-Men, you know? Say, for example, I wasn't in it, and it was Li'l Wayne or Usher or something? I'd be so pissed off. I didn't want them to screw it up. So that was my big concern. Not messing it up.

Q: Have you got the acting bug now?

W: I have the writing/directing bug. I always knew that one day I would exit this cage of my own thinking and dream up things for three minutes and video. I knew I would move away from that and move towards writing and directing longer pieces of content. It takes the same thing, right? To dream up a song or direct a video. So I knew I was going to graduate from three minute content, six minute content to an hour. I just didn't know my foot in the door was going to be an X-Men movie. So I want to do more acting, but I want to write myself the role. Because if I write myself the role, I can't screw it up! When you hear a song I wrote, a lot of the fans aren't saying, 'Will messed it up!' Because I wrote it. In this, I really have no excuse if I screw it up. So I want to act and write. If I were to go on American Idol, I wouldn't win. Because I'm not a singer. If I had an audition to be in a band, I wouldn't get in, because I'm not the best keyboardist. What I'm best at is dreaming up things. Coming up with concepts. And then executing them. So I want to do that.

Q: Are you going to put music on the backburner for this?

W: No, we have an album coming out. I'm a multi-tasker.

Q: Are you doing anything more with politics since the election?

W: Yeah. I'm doing a couple of things with Al Gore about the environment. I'm doing something with Clinton next week. Fundraisers here and there. I'm helping a friend of mine run for governor in Virginia. I do things here and there because I'm passionate about tomorrow and the youth. And as things evolve and life transpires, I'm not going to shy away from it. And I will continue to do that. I think of myself as an advocate. I don't like the word politics. I'm not a politician.

Q: How did you play your death scene?

Q: If you're moving into writing/directing, what kind of films would you like to make?

W: Action fantasy films. I want to do-it sounds weird because this genre doesn't exist-I want to do black fantasy films. I love black films, but they're always about barbershops, barbecues, gang life, family gatherings. And that's it. And they're comical. Then when I see Harry Potter, it's cultural, right? It's about English culture and it's imaginative. Or Pan's Labyrinth. It's the first Spanish fantasy film I'd ever seen. That was crazy! I have never seen a black fantasy film. As if black people aren't imaginative and didn't invent blues, jazz, rap, etc. So I want to do that. And someone said to me earlier, 'Well, black people don't want to see that.' But you don't make it for black people. You make it for the world. I'm an African-American and I write music, but I don't write music for black people. The world buys it. It's the same thing with film. If you pigeon-hole yourself, then you're going to make stuff for pigeons.


Wolverine is released on Triple Play Blu-ray and DVD on Monday 19th October 2009.