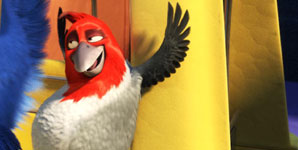 Interview with Will.I.Am for the release of Rio conducted in Rio De Jeneiro on March 22nd 2011

Best known as a member of multi-platinum award-winning group The Black Eyed Peas, Will.i.am has established himself as one of the country's top music producers, working with everyone from U2 to Justin Timberlake. But for Rio, he also stepped away from the mixing desk to supply the voice of red-crusted cardinal Pedro, who along with buddy Nico supplies the wild side to Blu's new life in Rio. Of course, he also contributed greatly to the soundtrack, producing and writing material with Jamie Foxx, Sergio Mendes and Carlinhos Brown. Here, the music legend explains how his love of Rio and his continued involvement with the city has inspired a move to Brazil.

How did you first get involved in Rio?

They called me up, and when they told me that it was an animated movie about Rio, I was in it to win it, because one, I love Brazil, and two - I love Brazil.

What do you love about it?

I don't know how to express how much I love Brazil more than I have in the past, but my love for Brazil came from my travels back and forth working with the Black Eyed Peas and my good friend, Sergio Mendes. The first time I came to Brazil was with Sergio Mendes and now I'm here in Brazil being a part of Rio with Sergio and it's magical.

When were you last here?

I was here last week for Carnival, where Jorge Ben Jor came on stage with me - the dude is like Michael Jackson, Quincy Jones and James Brown combined. I flew back for this because I couldn't miss this for the world - it is amazing to see the whole cast here. I'd like to thank Carlos for having me and pushing me - it's been a great experience.

How did you find the experience voicing your character?

It was great to be able to do the voice - I had done Madagascar 2 before, but this was a totally different experience, and I'm glad I did it. The role as it was originally written was very small, but they added some more parts, which was great.

Did you get to improv much?

Yes. First you do it the way it's written, for safety, then you do a couple of improvizations of it, so that was fresh. A couple of scenes we improvized ended up in the finished movie - all that ninja stuff. That wasn't written.

You got to collaborate both musically and as an actor with Jamie Foxx - did you know each other?

We've known each other and always tried to work together, but now we finally did the first thing together, and hopefully it won't be the last. I'm hoping we're going to get to do something again real fast.

How was he in the studio?

You've got a lot of singers - some of them can't sing, and you know, I can make them sound like they can. With Jamie... he sings really, really, really, really good. So that was a pleasure and a blessing to be able to work with somebody that makes your job easier, because I don't have to do a whole lot of editing and correcting. It's the way it's supposed to be.

How difficult was it for you to capture the city's musical flavor?

That wasn't too difficult at all - I've worked with Sergio Mendes and Carlinhos Brown before, but the only difficult part was I'm usually asleep by now - I don't really know Rio during day time, when the sun's up. I'm usually up at night, so I had to tone down my experience DJing at night, performing at night, and going to an after-party. You don't bring that to this movie, but because I'd worked with Sergio and Carlinhos before, and through Jorge Ben Jor, I was familiar with that music, so it was easy for me to do it.

Were you familiar with the samba music that's featured in the parade scene?

I got taken to the Mangueira Samba School, so I got to see that style of music two years ago - I was able to see all the different flavors of samba.

It's about the same. I would say making music for an animated film you have to use more of your imagination because when you're making the music, the majority of the time the animation isn't complete, so you have to take the sketch and trust the director. He's going to show you a black and white pencil sketch and say go to work, and you have to imagine and anticipate that it's going to look like Ice Age. So I would say your imagination is turned on even higher when you're doing it for animation.

Do you see a growing interest in Brazil in the US?

With the World Cup coming, and the Olympics... yes. I remember coming here five years ago and it was much different. There was still the joy and excitement of the people, but it looked different. Now with the growth of the Brazilian economy I think the whole world is looking and anticipating Brazil. I think one of the reasons Obama came here was to learn how to grow an economy.

Is it true that you're moving here?

I'm signing the papers on Thursday. I bought a place in Baja, about 40 minutes from here. The reason I'm moving there instead of here in Rio is because I have a friend there who will be my neighbor. That's the only reason why - I don't want to move to a place where I don't know people.

After the move, what's your next work project?

I'm getting ready to start touring with the Peas...

Do you have a preference for touring over studio work?

I like touring best. People ask me if I get home sick, I say I get sick of being home.