Will Smith And Idris Elba Battling For Quentin Tarantino Role? 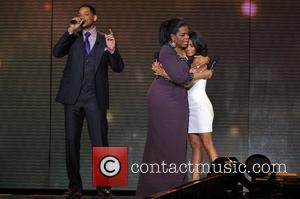 Picture: Will Smith, Oprah Winfrey, and Pinkett Smith during Surprise Oprah! A Farewell Spectacular at the United Center in Chicago Chicago, Illinois - 17.05.11

Will Smith, the multi-award winning American actor, is reportedly the favourite to land the lead role in Quentin Tarantino's new movie 'Django Unchained', however, 'The Wire' star Idris Elba has emerged as another candidate for the part. According to Collider.com, Will Smith is the front-runner for the controversial new flick, but a series of tweets from Elba have begun a new wave of speculation.
The movie, scheduled for release in 2013, follows the story of a freed slave who enlists the help of a German bounty hunter to track down his slave wife and liberate her from an evil plantation owner. It was previously reported that Will Smith had been "informally offered" the role of the slave, but Idris Elba may also be in line for the part. In a series of tweets, the 'Luther' star told followers, "Having one of the biggest meetings of my professional life today.meeting a very controversial director for a very controversial part". The internet became alive with rumours that Elba was meeting with Tarantino to discuss the lead role in 'Django Unchained'. Responding to the speculation, Elba tweeted again, saying, "I wish I could tell you more but.in due time. On the plane to the destination of my fate...ok.. a lil dramatic..destination of my life..?"
Will Smith's upcoming filming schedule could cause problems with a role in Tarantino's new movie. He is currently shooting 'Men In Black Iii' in New York City, and is scheduled to begin work on an untitled sci-fi project by Lana Wachowski and ANDY WACHOWSKI.