Will Smith, Robert De Niro, U2 And Lady Gaga Join Jimmy Fallon For New Era Of The Tonight Show 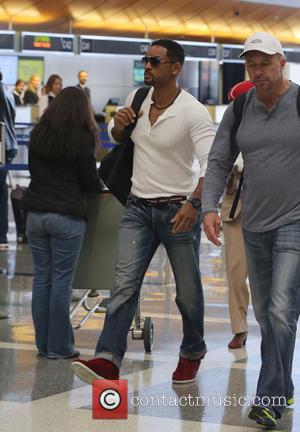 Will Smith, Robert De Niro, Lady GaGa, Lindsay Lohan and U2 were among the stars who turned out on Monday (17Feb14) to help Tv presenter Jimmy Fallon launch a new era of America's The Tonight Show series.

The comedian took the long-running talk show back to New York for the first time since iconic host Johnny Carson moved it to California in 1972, and a slew of celebrities stopped by the NBC studios to celebrate the big move.

Fallon opened his first Tonight Show by thanking his predecessors, including Jay Leno, who stepped down from the programme after 22 years earlier this month (Feb14), before taking aim at a friend who had bet against him ever hosting the legendary series.

Looking into the camera, Fallon said, "To my buddy who said that I'd never be the host of The Tonight Show - you know who you are. You owe me $100 buddy!"

The comment prompted De Niro to begrudgingly walk out onstage and hand the host a $100 bill, but the movie veteran wasn't the only one - he was followed by the likes of Tina Fey, Joan Rivers, Seth Rogen, Lindsay Lohan, Kim Kardashian, Sarah Jessica Parker, Mariah Carey, Mike Tyson and a scantily-clad Lady Gaga, who each parted with $100 as part of the joke.

Fallon's first Tonight Show interviewee, Smith, then showed off his moves in a sketch titled, The Evolution of Hip-Hop Dancing, in which the pair ran through popular dance trends over the years, from the Running Man to the Robot to the Carlton, which was named after the actor's The Fresh Prince of Bel-Air co-star Alfonso Ribeiro's geeky onscreen character, Carlton Banks.

U2 provided the musical entertainment for the night by performing new song Invisible from the roof of 30 Rockefeller Plaza, where the Nbc studios are based, and later joining Fallon and his house band The Roots inside for an acoustic version of their Oscar-nominated song Ordinary Love from the Nelson Mandela biopic, Mandela: Long Walk To Freedom.

Bono marked the occasion by gifting Fallon a Red electric guitar from his line of instruments for the (Red) charity, which raises awareness of the fight against Aids.

The big star guests will continue throughout the week as Gaga, Jerry Seinfeld, Bradley Cooper, Will Ferrell and U.S. First Lady Michelle Obama are all booked to make appearances on The Tonight Show.