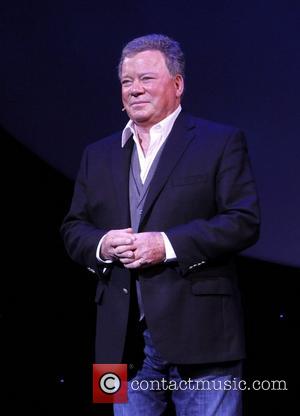 William Shatner returned to the stage on Thursday (February 16, 2012), for his one-man show 'Shatner's World: We Just Live in it'. It marks the actor's first appearance on Broadway since 1961, when he starred in the comedy 'A Shot in the Dark'.
His new show, a typically ramshackle affair, sees the former Star Trek man look back over his career highs and lows with candour and humor. Entertainment Weekly were astonished at the 80-year-old's "seemingly bottomless reserve of energy", adding, "Shatner's World is undeniably fun. He's his own best audience. It's Shatner's show: We're just living through it". Howard Shaprio of the Inquister was equally complimentary of the show, writing, "Shatner's World is equal parts endearing and funny - a mixture of two worlds, really: everyday and rarefied. The show is a must for Shatner fans, but you needn't be all that familiar with his work to understand a lot about him through his stories, which travel from his roots in Montreal through college there at MCGill University". Other sections of the show touch on the actor's often oddball career choices, and his time as a struggling stage-actor in New York. During a recent interview with the Los Angeles Times, Shatner had macabre predictions for his first Broadway effort in 50 years, saying, ".I may die on stage.I'm at the age where people are dying. So they can say that maybe he'll die and we'll see him dying".
Following its stint on Broadway, 'Shatner's World: We Just Live in it' will begin a national tour starting at the Pantages Theatre in Hollywood on March 10, 2012.