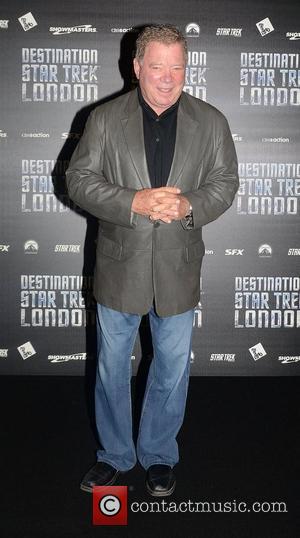 Picture: William Shatner Celebrities pose for photographers, without British actor Patrick Stewart after he refused to take part in a photocall for 'Destination Star Trek London'...

William Shatner's new iPhone app Shatoetry, by Blindlight, was catapulted to the top of the entertainment app list on Apple's App Store after just one day of release. It allows users to choose from hundreds of words to arrange sentences, which the former Star Trek captain will then recite in his trademark style.

Currently touring the US with his critically acclaimed one-man show, Shatner managed to sit down with the Vancouver Sun to discuss how he'd like to expand app, explaining, "Words to music. We have in mind holiday things. We have in mind events in your life, words so that you can use them as well. We will increase this if people love it and tell other people that they love it." Sounds fun, though will Shatner tap into the hugely lucrative Star Trek market? "Well, yes. I don't think we'll leave (that) opportunity unexplored, but I wanted to be very careful about how we introduce it so it is not something that is derogatory or stupid. I want to make sure that it's used in the way it's meant to be used, which is for your entertainment," he said. At 81-years-old, Shatner is showing no signs of slowing up and is always on-hand to take advantage of modern day technology, explaining, "I'm doing podcasts. I'm certainly doing everything else; Facebook, Twitter and all that kind of thing. I'm taking advantage of communicating with the people out there as much as possible, and this app is one of those ways."