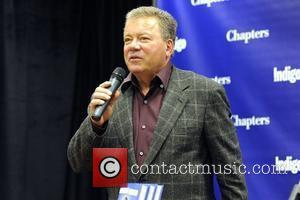 Picture: William Shatner book signing at Indigo Manulife Centre to promote his latest book 'Shatner Rules: Your Guide to Understanding the Shatnerverse and the World...

William Shatner has been appearing in adverts for the travel web site Priceline for 14 years. In a recent commercial for the company, his character, described on Wikipedia as a "pompous, fictionalized version of himself" is killed off in a dramatic, but comic scene.
His character, The Negotiator, rescues a group of panicking holidaymakers from a bus that is teetering over the edge of a bridge. He says to them "Save yourselves - some money," before handing them his cellphone as the bus tumbles (with him onboard) into the creek below. A report from courierjournal.com states that the chief executive of Priceline, Christopher Soder, said the company needs an advertising change, to reflect its broader strategy. The Wall Street Journal also quotes Soder as saying "The challenge is harder to get people's attention than it used to be. . So we decided to do something really over the top to get the message across." Shatner himself told the Associated Press "I'm in grief mode. It's not the first time I've had an iconic character die off," referring to his famous Star Trek character Captain James T. Kirk, who died in the line of duty.
William Shatner has admitted that Priceline have given him share options in return for appearing in their television commercials, but denies that they are worth the "hundreds of millions of dollars" that some have suggested.