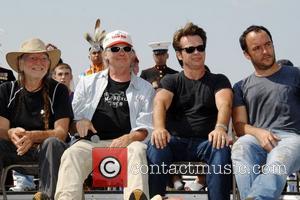 Willie Nelson and Ray Charles' longtime manager Joe Adams gave mourners something to laugh about at the crooner's funeral in Los Angeles on Friday (18JUN04) with a chess anecdote.

The country legend performed a tearful rendition of the blind soul star's classic GEORGIA ON MY MIND at the service at the FIRST AME CHURCH and then joked with Adams about his late pal's chess skills.

Adams told the congregation, "Willie, I think this is a good time to tell the people that you're in a good position now to beat Ray in a chess game."

Nelson laughed and said, "I sure couldn't do it before."

Adams continued, "Ray and Willie are both avid chess players and they would play between shows... Ray seemed to always win and then one night, Willie figured it out. What did you tell him Willie?"

To which, the singer recalled, "I said, 'The next time we play, can we turn the lights on?'

Blues great Bb King had a similar story to share - recalling how Charles always beat him at cards.

He recalled, "I finally got wise to that - he'd fix the cards with his braille."

Stevie Wonder had mourners dancing in the aisles minutes later when he performed an uplifting version of gospel tune THANK YOU LORD.

The fellow blind soul star, who once recorded an album of Charles tunes, said, "I didn't know that Ray Charles was blind and when they said, 'You should do this album about Ray Charles,' I said, 'Why.' They said, 'Because he's blind.' I said, 'No, he's just great.'"