Willy Moon certainly knows how to make an entrance. From the crooner cool of the cover of his debut, Here's Willy Moon, to the swathes of strings and Hip Hop beats on opening track 'Get Up', he's not a afraid to show his cards. But, thankfully, the 23-year-old isn't a case of style over substance. For just under 30 minutes he proves himself to be equal parts superstar producer in the making, and a rather catchy songwriter to boot. It's difficult to think of a more assured, confident and unique debut in recent years, and I'm sure that's the reaction he was going for. 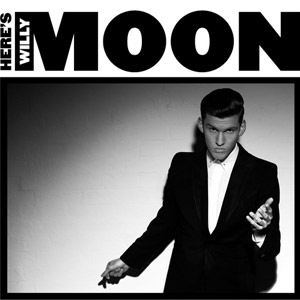 That's not to say that there aren't moments where you question his judgement, 'Railroad Track' for example is perhaps a little too reminiscent of Kanye West's 'Jesus Walks'. But for the most part this doesn't sound like an album made by an unknown New Zealander. At its heart the record is pure fun, with a dark undercurrent piercing the heady mix of Pop hooks, Rock n' Roll attitude, bass heavy beats, and slick production.

While Moon is vocal about his short attention span, in many ways his predilection for compositions that last a lean 3 minutes gives the whole album a certain sense of pace. Lead single 'Yeah Yeah' samples the Wu Tang Clan and along the way he covers the likes of Screamin' Jay Hawkins. But rather than feeling like he's trying to pad out his debut with quirky familiarity, these choices don't overshadow or distract from his own material. In fact, much of the record is geared towards being so anthemic, that it's difficult not to get carried away with Moon's enthusiasm. 'Working For The Company' for example sounds like a Broadway production of a mash up between a 1940's big band and Pink Floyd's 'Money'. It shouldn't work, or at the very least should sound like a gimmick, but put simply it does work, and surprisingly well.

That's perhaps the most enjoyable thing here too. Moon throws very recognisable elements into the pot, and somehow his homemade chemistry set creates something rather unique. Rarely do albums that sound this fresh owe so much to the past, yet Moon uses that to his advantage. Lyrically, there's nothing really spectacular here, but that almost seems to be part of the trick he's pulling off. His vocals add a pop sheen to tracks that could otherwise feel as if they're being pulled in too many directions at once. And it's only when you get to the curiously titled closing instrumental track 'Murder Ballad' that you suddenly notice their absence. Sounding something like a fight between John Barry and Tom Waits on a moonlit night, it's a slightly offbeat ending to an otherwise very coherent first effort.

The buzz surrounding Willy Moon is understandable and justified. He's not a Pop pretender, nor a Hip Hop wannabe. He perhaps needs to be a little more ruthless next time round to curb his more fanciful creative urges but, overall, Here's Willy Moon is just as impressive an introduction to a new artist, as some of the best debuts of the 21st century.