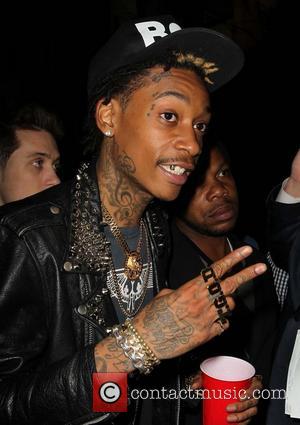 Wiz Khalifa and Amber Rose would kindly like you to say hello to Sebastian 'The Bash' Taylor Thomaz, the pair's first child together.

The couple each uploaded comments regarding the birth of their new son on to Twitter moments after model Amber gave birth, with Wiz writing, "Everyone welcome this perfect young man into the world," and Amber: "Happy Birthday to our baby boy Sebastian 'The Bash' Taylor Thomaz! I'm so happy u guys I fell in love all over again,."

Prior to this announcement, Wiz had told the world of the impending child birth when he uploaded a picture of himself in hospital scrubs, with the caption: "Daddy time." Now it really is 'daddy time' for the rap star, who is known for his 'young, wild and free' lifestyle, as he he Amber have a big task ahead of them as they enter the ever increasing world of hip-hop couples with/who are having babies.

The pair received a round of applause from some of their celebrity friend on Twitter too, with Rihanna tweeting a picture of herself and Amber Rose with the caption: "Congratulations to my fam mistercap and @darealamberrose !!! Welcome baby Bash! You're born in an exquisite month #babypieces". Wiz's regular collaborator Snoop Dogg also had some congratulatory words too, writing: "Welcome 2 fatherhood mistercap!!! Congrats 2 u n @darealamberrose on ur new son."

Wiz and Amber got engaged in 2012 having met shortly after Amber split from Kanye West in 2011. Wiz announced the news that the pair were expecting at September's MTV Music Video Awards.