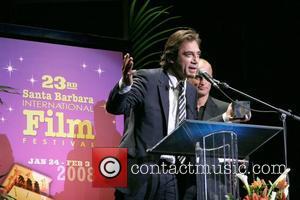 LATEST: Woody Harrelson will not face felony charges in connection with a confrontation with a cameraman outside a Hollywood nightclub last month (JUN06). Yesterday (26JUL06), county prosecutors in Los Angeles said the case will be referred to the city attorney's office for review. Misdemeanour charges could still be filed, according to city attorney's spokesman FRANK MATELJAN. The 29 June (06) incident involved JOSH LEVINE, a cameraman from celebrity news website TMZ. In a one-page evaluation, Deputy District Attorney ALISANNE SCOLNIK AUGUSTA considered allegations that Harrelson broke the camera's viewfinder and choked the cameraman, who refused the actor's requests to stop taping him. Harrelson grabbed the cameraman around the neck, but the prosecutor in the case wrote that "the force used is not to the level that would cause great bodily harm". She also stated that the cameraman's injuries were not serious, and that videotape footage does not show a clear intentional breaking of the camera. Mateljan said the city attorney's office is expected to receive the case report this week (ends 30JUL06). Harrelson's spokeswoman, INA TRECIOKAS, had no comment.