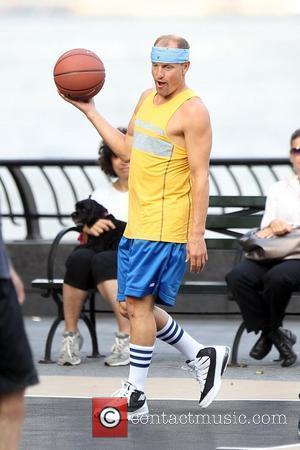 Three Cheers for Woody Harrelson - it's his 50th birthday today (23Jul11).
Born Woodrick Tracy Harrelson, Woody is best known for his breakthrough role as a dim-witted bartender in TV hit Cheers. He's since gone on to tackle a host of quirky roles, playing a serial killer, a country singer, a bounty hunter and even a zombie slayer.
Away from Hollywood, Harrelson is a family man and dad to three daughters, as well as a strict vegan and devoted environmental activist.
To mark his 50th, WENN takes a look back at his life with 10 fascinating facts about Harrelson himself. Woody, we salute you!

- His dad, Charles Harrelson, was a professional hitman, who was sentenced to life behind bars for assassinating a federal judge. Harrelson, Sr. unsuccessfully tried to break out of prison on America's Independence Day (04Jul) in 1995 and died 12 years later (07) of heart disease.
- Woody turned vegan at 24 to cure his acne; he now eats only raw food.
- Born in Texas, he now calls Hawaii home and counts Kris Kristofferson and Owen Wilson as his neighbours. His house in Maui is completely solar-powered.
- During one madcap night in 1982, Harrelson was arrested for dancing in the middle of a street. He was charged with disorderly conduct and resisting arrest after running from cops.
- Harrelson met the love of his life, Laura Louie, in 1987 on the set of Cheers and made her his wife in 2008. Alanis Morissette and Willie Nelson performed at their nuptials.
- Beatles legend Sir Paul MCCartney is a close friend - the pair bonded over their shared passion for animals rights.
- Despite critical acclaim and two Oscar nods, his performance in Indecent Proposal won him the Worst Supporting Actor trophy at the 1993 Golden Raspberry Awards.
- Harrelson has long championed the legalisation of marijuana and joined the advisory board for the National Organization for the Reform of Marijuana Laws in 2003.
- In a charity soccer game last year (10), Harrelson scored the winning goal in a sudden death shoot-out alongside teammates Robbie Williams, Mike Myers and Michael Sheen. After smashing the ball into the back of the net, the actor admitted the match in England was "the most terrifying thing I have ever experienced".
- He shares his birthday with Harry Potter star Daniel Radcliffe, rocker Slash and infamous White House intern Monica Lewinsky.