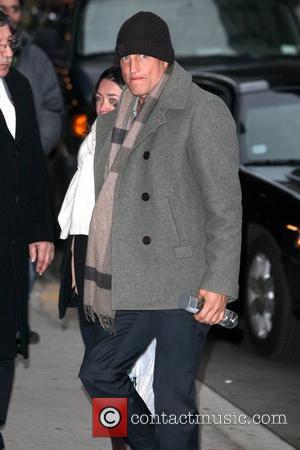 Actor Woody Harrelson dropped almost 30 pounds (13.6 kilograms) in his bid to mimic Christian Bale's emaciated look in The Machinist for his role as a twisted cop in new movie Rampart.
The Natural Born Killers star, 50, wasn't convinced he could pull off the portrayal of an unhinged Los Angeles Police Department officer when he first donned the uniform for director Oren Moverman.
He tells the Los Angeles Times, "The first time I put on the uniform it just didn't feel real to me, it felt like Halloween, just a costume. But Oren saw me and was like, 'Yes!' He could see it, but I just couldn't at that point."
Vegan Harrelson decided he would need to lose a little weight to make the part work so he embarked on a strict diet and aimed to slim down to 150 pounds (68 kilograms) - but he couldn't quite reach his goal.
He tells New York Magazine, "One-sixty (pounds) was the glass floor. I couldn't break it. I wanted to get to 150. I was thinking The MAChinist - Christian Bale, you know - borderline anorexic."
But the change of appearance was enough to help Harrelson envision himself as a policeman and he later joined real cops on ride-alongs to get a taste of life in uniform.
He says, "Eventually I started to feel I was in the spin of this guy. It's amazing how things can shift. The thing is I have to make myself believe it or nobody else will."