Although refreshing at first it is hard not to find the WU LYF's cloak of mystery, a thing which seems to precede the Mancunian 'quartet as it did similar blog-hype darlings Lansing-Dreiden, as little more than a gimmick. Sure, an apparent hatred of the press and a refusal to play the media board game is something to be respected; but when the same band still has a manager and even a press officer, and finds itself playing in front of audiences of which over half are such people with guestlist accreditation, it all seems a little flimsy and laughable. At least until you witness them. 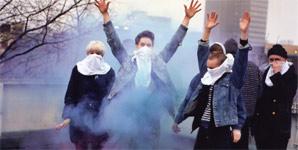 It's a shame that this reputation precedes them, because live World Unite / Lucifer Youth Foundation portray a naked, primordial joy free of pretensions and translucent messages that few others manage. The four-piece are driven by tribal drums that have mutated from krautrock roots, exploding and falling out of rhythm in a perfect compliment to the messy majesty of the rest of the band. For the main part the beats are barely a trace away from ones preceding it, with a familiar 'tss..tss.tss.CRASH...' perforating most tracks, but their rabid, unrelenting attack brings fresh life into each one.

WU LYF's sound is hard to pin down, with adjectives such as 'vital', 'entrancing', 'explosive' and 'mesmeric' fitting better than any comparison. Beneath the reverb-soaked Hammond organ sound that cloisters every song the band are a bundle of pent-up euphoria, shrieking with religious fervour and jumping in the air with devotion like just-cured cripples.

They also transcribe the 'gang' persona of geographical forefathers Oasis and Morrisey into something much more sonically exciting, a sound which may very loosely be described as a needlepoint injection of British Sea Power's combustible cult-friendly squalls into the thousand-yard stare of Swans, with vague nods to krautrock and soul, and a sound that works so much better live, ebbing and flowing, bursting and rebuilding in wave after wave.

A question asked before the gig, whether it would be the sort that you'd talk about in a decade, seems slightly less ridiculous after it, as does any question about the true validity of the bands manifesto. In the end none of it is relevant. Wu Lyf have the strength to rise above any presumptuous criticism, a congregation of new-found devotees will attest to that. 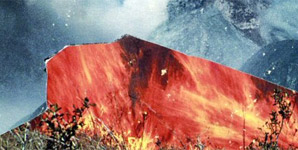