Yes Bassist Chris Squire Is Bowing Out Of The Group's Forthcoming Summer (15) Tour After He Was Diagnosed With Leukaemia. 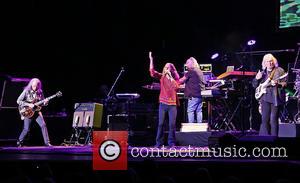 The 68-year-old rocker is suffering from a form of the disease called acute erythroid leukaemia and is preparing to receive medical treatment at a facility in Phoenix, Arizona, where he lives.

It will be the group's first live performance without the British star since its 1968 formation and he will be replaced by Billy Sherwood, who was a member of the band from 1997 to 2000.

In a statement, Squire says, "This will be the first time since the band formed in 1968 that Yes will have performed live without me. But the other guys and myself have agreed that Billy Sherwood will do an excellent job of covering my parts and the show as a whole will deliver the same YES experience that our fans have come to expect over the years."

Yes kick off the tour in Mashantucket, Connecticut in August (15) and conclude the shows in Vancouver, Canada in September (15).