A tree stood behind each member of Yo La Tengo as they entertained 1,949 fully seated fans at The Barbican; three trees, like a leafy trident, representing perfectly Yo La Tengo's stature in the industry. 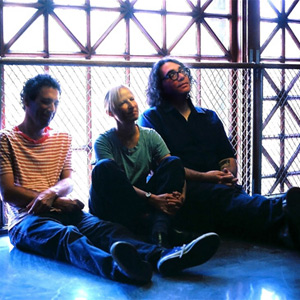 Ira Kaplan, Georgia Hubley and James McNew - like the object d'art trees behind them represented - have firm roots in their field. They're weathered; sturdy, reliable, and not answerable to a sudden shift should the winds change. I'm going to stop saying trees now, as, 'fauxliage' aside; this was a truly lovely concert. The band were tender in their approach, the purity in their vocals were crystal. This same dreamy fuzz of melancholic has kept fans captivated for almost 30 years now.

Kaplan - an accomplished frontman - was comfortable yet addicted. He could murmur out a languid joke and spin his guitar manically within minutes of each other and neither seemed contrived or out of place. At one point, he almost certainly made angry love to his synthesiser. It sounded weird, but Yo La Tengo are weird. The night was split in half. Latecomers will have wondered into a haze of acoustic fudge as YLT strummed and gently trilled the audience into a pseudo-comatose, while an intermission saw an electronically fused, more energetic second half supersede the first portion.