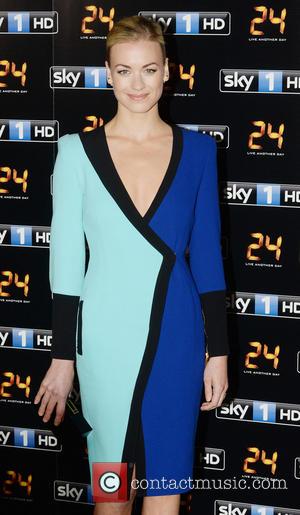 Actress Yvonne Strahovski has joined Ariana Grande and Victoria Justice in distancing herself from the latest nude photo scandal to rock Hollywood, insisting risque snaps allegedly showing her baring all are fakes.

A mystery hacker violated the privacy of a number of top female celebrities, including Jennifer Lawrence, Kate Upton and Kristen Dunst, on Sunday (31Aug14) by posting a series of explicit personal pictures online.

Grande and Justice, who were also victims of the illegal leak, were quick to insist they are not the girls featured in the saucy images, and now Strahovski has followed in their footsteps by issuing a denial too.

Taking to her Instagram.com account, the 24: Live Another Day star writes, "It is with great sadness and disappointment that I address this hacking issue. To my fellow actresses whose privacy has been invaded-my heart goes out to you. I'm so disappointed that there are people in the world who feel the need to comitt (sic) these criminal acts. Some of these pictures are fake, my own included."

Strahovski goes on to urge fans not to view the photos to help protect what little privacy the hacking victims have left.

She adds, "Regardless-I ask you all-do not share the links. Don't even look at the photos. Just let people have the privacy they deserve. Integrity is sacred."

Representatives for both Lawrence and Upton have waged war on those responsible for leaking the private pictures, vowing to sue anyone who publishes or helps to facilitate the spread of the stolen snaps, while agents at the Fbi have confirmed they are investigating the case.