Zac Efron is set to appear in new romantic comedy 'That Awkward Moment' opposite Miles Teller and Michael B. Jordan. 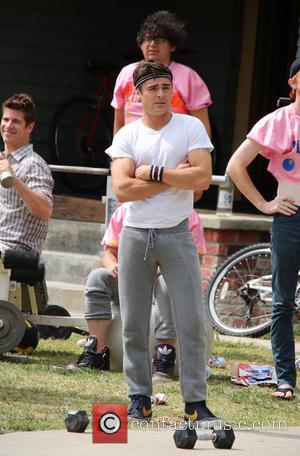 The first picture of Zac Efron in his upcoming romantic comedy 'That Awkward Moment' has been unveiled ahead of its January release.

Efron really isn't the innocent Disney star he once was, is he? Since 'High School Musical 3' he's been peed on by Nicole Kidman in 'The Paperboy', become a boy racer in 'At Any Price' and smoked pot as a hippy in 'Liberal Arts'. Now he plays a young bachelor who is on a mission to go through as many girls as possible without falling into the trap of a relationship in 'That Awkward Moment'; unfortunately, there's no clear cut line between friends and lovers these days. His cohorts are being played by Miles Teller ('The Spectacular Now') and Michael B. Jordan ('Fruitvale Station') but, like any film about bachelorism (yes, that's a word), Efron's character Jason will no doubt fall head over heels for some girl-next-door type who's 'different' from other girls.

It's not just the movie roles that have got more adult either; his personal troubles would shock Disney fans as he was only fairly recently discharged from rehab after secretly struggling with a serious cocaine addiction. His habit had a serious impact on the filming of another of his upcoming movies 'Neighbours' when he regularly failed to turn up to the set. Sources close to him admitted to TMZ, 'It was common knowledge he was struggling with cocaine.' Zac, Miles and Michael are three bachelors in 'That Awkward Moment'

On the other hand, Zac doesn't seem to be having too many problems on the set of his latest flick - rather, he appears to be having a lot of fun and even posted a snap on his WhoSay account of himself and Miles pretending to be Spider-Man while Michael looks away err. 'awkwardly'. 'Me, @michaelb4jordan and @Miles_Teller clowning around at the #ThatAwkwardMoment photo shoot. New name, old crew. Check it out in theaters JAN 31st. - Z', Zac told his WhoSay and Twitter followers.