Zac Efron "has been drinking [soup] through his straw" after suffering a broken jaw with his good friend, Adam Shankland, helping the recovery process. 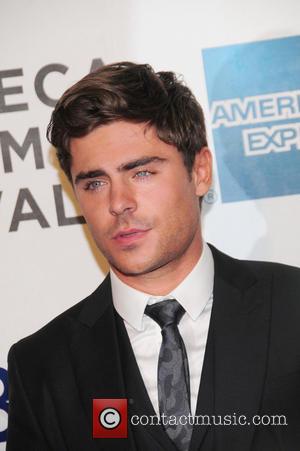 Last weekend Zac Efron suffered a broken jaw in a freak accident that occurred in his LA home.

The 26 year-old slipped on a puddle of water at the entrance of his house last Sunday (Nov 10th), which caused his jaw to break, Efron also suffered a large gash under his chin that required stitches.

The 'High School Musical' actor is being helped to recovery by his longtime pal Adam Shankman, who is the former 'Hairspray' boss.

Shankman recently spoke with Us Weekly about the condition of Zac and he said, "I have been at his house every day and I have been making him soup. He has been drinking it through his straw, He has to eat through a straw on a syringe. It's horrible."

The 'So You Think You Can Dance' judge spoke to the mag at the 6th annual GO GO Gala on Thursday (Nov 14th) and explained how he is making soup "from scratch" for his injured friend, which included "a beautiful cream of asparagus."

"He's like my little brother, has been since Hairspray," Shankman added.

"So I talk to him like a little brother, which means I give him a lot of sh-t."

Efron had to cancel an upcoming promotional tour for his upcoming comedy film 'That Awkward Moment', where he stars alongside Miles Teller and Michael B. Jordan.

The 'Parkland' actor has had a turbulent year after it was revealed he spent time in a rehabilitation clinic for alcohol and cocaine abuse but since his release, the Efron is reportedly clean and wants to put his party lifestyle behind him.

Efron is recovering at his LA home