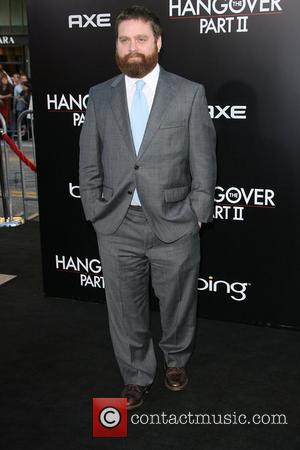 The Hangover 3, the third movie in the smash-hit comedy franchise, is already in the works according to Zach Galifianakis. The actor says a storyline for the project has already been written, despite 'Part 2' only debuting in cinemas last month.
During a new interview with Rolling Stone Magazine, 'Hangover' star Galifianakis confirmed the third movie is on the way, saying, "They want to do a Hangover III. I'm getting fricking phone calls already". The comedian revealed the plot will involve his character 'Alan' being smuggled out of a mental intuition by his fellow 'Wolf Pack' members, played by Bradley Cooper, Ed Helms and Justin Bartha. When director Todd Phillips was quizzed about the third movie, he told Collider, "As far as where it takes place, I'm very open, like the Olympic committee, to being pitched and presented cities, flown around with wine and women and bribed and then I will make my decision". Recent speculation has suggested Amsterdam could be the chosen location for the movie. It is understood that a third film would differ substantially from the first two, which have involved Galifianakis and co trying to piece together the events of the night before.
The Hangover Part II had grossed $205 million worldwide as of 30th May 2011. The original movie took in over $467 million at the box-office, a figure that has reportedly risen to over $600m with DVD sales.