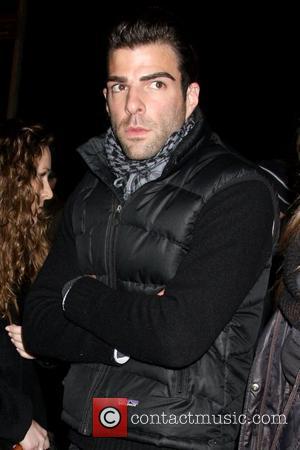 Zachary Quinto has been forced to dismiss rumours he's quit Star Trek, after comments he made in a recent interview about "stepping away" from the movie franchise sent fans into a spin.
The Heroes star plays Spock in J.J. Abrams' 2009 revival of the sci-fi saga, and is expected to return for a series of sequels.
But Star Trek devotees went into a panic this week (beg25Jan10) after the actor's interview with Wired.com, in which he hints at a hiatus from the franchise, hit the internet.
He said, "I'm stepping away from Star Trek for at least two years - no movies, no conventions, no anything for a while."
But Quinto is adamant his comments were misconstrued.
In a post on his official blog, he writes, "Obviously I will be a part of any upcoming films... reprising my role as Spock. What I meant was that in the meantime I won't be making any public appearances related to the franchise - or doing any more auxiliary projects pertaining to the Trek universe (sic). I will be focusing my efforts on other projects and preparing to shoot the next film - which will be released in June of 2012... two years from now. Hence the no Trek for two years remark. Worry not Trekkers. It was a misunderstanding of context."