Quinto Thanks Journalist For Helping Him Land Spock Role 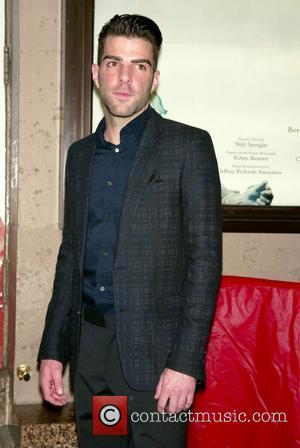 Picture: Zachary Quinto at the opening night of the Broadway play 'Desire Under the Elms' at the St. James Theatre New York City, USA - 27.04.09

Zachary Quinto credits a journalist who exaggerated his desire to play MR. SPOCK with helping him land his role in the new Star Trek movie.
The actor had just landed a role in TV hit Heroes when he heard about director J.J. Abrams' intention to take Star Trek back to the big screen.
But it wasn't until he made a casual remark about the film during an interview with a small newspaper in Pittsburgh, Pennsylvania that Quinto became a candidate to replace legendary Spock star Leonard Nimoy.
He explains, "The first interview I gave was to my hometown newspaper, and the journalist asked if there was ne thing else I'd like to do. I said, 'I heard they're making another Star Trek movie, I'd like to play Spock.' And then that interview got syndicated so other journalists researched it and then it escalated. Within a week, I was getting asked, 'We understand your dream role since birth is to play spock?'"
But Quinto admits he was happy to play along, because eventually the exaggerated story landed him the part.
He adds, "I was like, 'In fact, it is.' And so it worked out."