The plot for the forthcoming 'Star Trek' sequel has not yet been made concrete, according to star of the film Zachary Quinto. 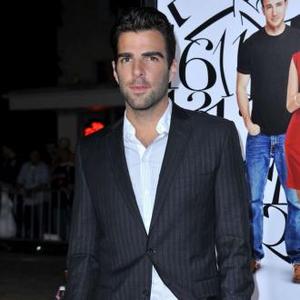 Zachary Quinto has revealed the plot to 'Star Trek 2' is not yet ''solidified''.

The actor - who plays the role of Vulcan character Spock in the sci-fi sequel - admits the director J.J. Abrams has not completely finished creating the storyline to the film, which he thinks is ''great''.

He told E! News: ''What you guys are going to see has yet to be solidified, decided and defined and that's the great part about working with someone who is so mind-bogglingly talented as J.J. Abrams.''

The movie - which also stars Chris Pine, Zoe Saldana and newcomers Benedict Cumberbatch and Alice Eve - has been filming for a number of weeks, and the 34-year-old hunk adds the schedule has been gruelling but enjoyable.

He added: ''It's been a really overwhelming schedule, but in all the right ways.

''I love to work hard and I'm certainly doing that right now.''

Very little is known about The Script of the film, but it is believed 'Sherlock' actor Benedict will be playing a villainous role after he was pictured in a fight scene with Spock.