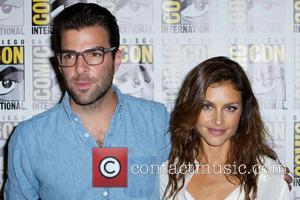 The Star Trek Into Darkness star has been linked to MCMillan since late last year (13), but the two finally acknowledged the romance on Instagram.com over the weekend (23-24Aug14).

Quinto is currently in New York filming indie drama Michael, in which he plays the ex-boyfriend of James Franco's character Michael Glatze, a gay activist who renounced his homosexuality and became a Christian minister.

Taking a break from the set, Quinto posted a photo of MCMillan on the photosharing app, along with the caption, "all this pretend is making me miss my real life baby. can't wait to see you soon @milesmcmillan..."

A few days later, MCMillan, who has worked for designers including Alexander MCQueen, Dior Homme and John Varvatos, shared a photo of Quinto holding a small tot in a baby carrier on his chest, and wrote, "My baby with baby! @zacharyquinto"