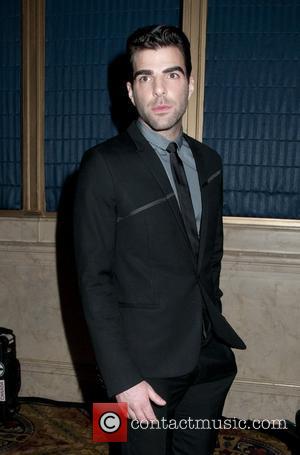 Hollywood star Zachary Quinto has set his sights on moving into the director's chair after making his debut as a producer on independent film Margin Call.
The Star Trek actor set up his own production company, BtD, last year (10) and worked double duty as one of the stars and producers on the financial drama, which features an ensemble cast including Kevin Spacey, Stanley Tucci, Demi Moore and Jeremy Irons.
Quinto admits shooting the project was a completely new learning experience for him as he got to work with so many talented actors.
He says, "It was like a master class every day. Even when I wasn't working with a particular castmember, as a producer I had the luxury of being on set everyday and watching them work, and I really, really grew and learned a great deal. I imagine it would be impossible not to."
And Quinto reveals he's keen to expand his filmmaking skills by eventually taking charge of the camera himself.
Asked whether he has plans to direct, he tells WENN, "I hope so. I'm a little ways (sic) off from it; there's still a lot of things I want to accomplish as an actor and producer, but it's certainly an ambition that I have on my list of to-dos."
But he knows exactly what kind of movies he wants to make: "Films that are intelligent, that are socially relevant, that are a little bit surprising, that tell a story a little left of centre and have a little different perspective or point of entry, that are character driven and really rooted in connection and in honesty and integrity."