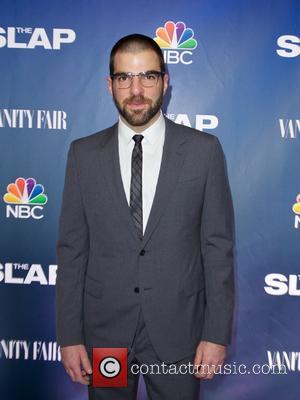 Picture: Zachary Quinto - Shots of a variety if stars as they attend the New York Premiere party for 'The Slap' which was held at The...

The Star Trek icon, who played Spock in the sci-fi series, passed away aged 83 after a battle with chronic obstructive pulmonary disease, and Quinto has now paid tribute to the man for his "disarming humour" and "dignity and love".

Quinto, who played a young Spock in J.J. Abrams' movies based on the cult show, bonded with Nimoy when he took over the role and began seeing the veteran actor as a father-figure.

He writes, "I lost my father at a very young age, and Leonard came to occupy a space in my life that was like a father figure. I had this person that I could look to with such respect. He was refined. And he cultivated a sense of dignity and respect for other people.

"When I publicly announced I was gay, Leonard's embrace was unconditional. I shared my relationships with him. We spoke of it often during that period in my life and afterwards. He was supportive and encouraging. He met my boyfriend, and we had dinner together.

"The first thing that I really took note of with Leonard was his sense of humour. He used it to disarm people. Those who had certain expectations were often surprised by how funny he was. Wise man that he was, he never took anything too seriously, yet he was a very serious man."